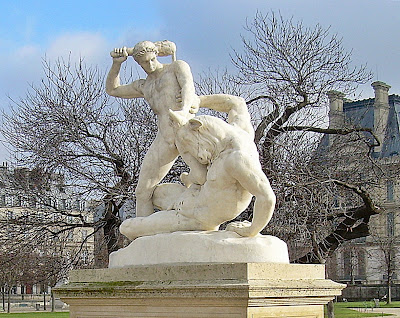 
Whereas Friel’s approach to the question of history-writing is stimulated by the Irish debate about national history, Eco’s BAUDOLINO can be seen in the light of a theoretical debate on historiography without reference to a specific national context. BAUDOLINO’s doubtful account investigates history telling and “historiographic metafiction” as discussed by Linda Hutcheon in A Poetics of Postmodernism (1988), where she sees postmodernist critical rediscovery of history as opposed to the detachment from history of early modernist formalism and aestheticism [2]. In “Postille a IL NOME DELLA ROSA”, Eco, too, argues that Postmodernism views both literature and history as discourses and systems of signification through which we deal with the past. While postmodernism re-establishes the historical context as relevant, it also problematizes the very notion of historical knowledge. The implied notion is that there cannot be a single transcendent concept of “genuine” history as all goes through a dialogical reviewing of the forms and values of the past [3]. Post-modernism undermines all assumptions of objectivity, neutrality and impersonality allegedly attributed to historical statements. In postmodernist interpretations, historiography is a method of rescuing aspects from the past for a study of the present.

Eco argues that irony is the essential feature of the postmodernist reply to the modernist rejection of the past (NDR, 530). Parody is the discursive procedure which questions the past rather than destroying it, and this is especially evident in BAUDOLINO. This picaresque adventure uses parody to confront authority - both the political authority of Friedrich (as well as of contemporary politicians), the Christian Church, and the authority of both the literary author and the historian. The story of BAUDOLINO is told by a liar and impostor who writes his diary in vernacular by scraping clean a stolen parchment. The authoritative account of history written in Latin (Otto of Freising’s Chronica sive Historia de duabus civitatibus) is erased to make room for BAUDOLINO ’s narrative in dialect, crowded with entertaining vulgarities and mocking remarks about Friedrich’s army. BAUDOLINO ’s historical context gives Eco a chance to deride Umberto Bossi’s Lega Nord, a party founded in 1989 and characterized by the idea that the northern regions of Italy should be independent from the south. Bossi demanded that May 29th be made the regional main holiday of Lombardy in order to commemorate the Lega Lombarda which fought against Friedrich Redbeard on 29th, 1176, at the Battle of Legnano. In BAUDOLINO, Eco is sarcastic about the fact that this battle took place fourteen years after the razing of Milan to the ground by Redbeard with the help of the towns which later joined forces in Lega Lombarda in order to fight against him [4].

While reading Eco, we are reminded of Friel’s investigation on the right of the historian to manipulate events for the greater good of the nation. In Eco’s novel, this can be seen by considering the character of Otto of Freising, a strict man of undisputable morality in charge of BAUDOLINO ’s education at Friedrich’s court. He does not condemn BAUDOLINO’s lies but rather justifies them: “se tu vuoi diventare un uomo di lettere, e scrivere magari un giorno delle Istorie, devi anche mentire, e inventare delle storie, altrimenti la tua Istoria diventerebbe monotona” [5]. Otto allegorizes the concept of fictionalization of history (as expounded by Hutcheon) but he also eliminates one of the basic distinctions between fiction and history. Hayden White argues against the idea that history totally differs from fiction. White observes that if on the one hand the historian mostly “finds” while the fiction writer “invents” [6], on the other “invention” plays a relevant role in the historian’s work. In the construction of his narrative, the historian uses a number of literary strategies, such as the arrangement of facts within a story provided with a discernible beginning, middle, and end (White, p. 7).

However, it is significant to point out that in BAUDOLINO, Otto’s reason for changing historical facts is not closely connected with the cause he supports but rather with the desire of making history interesting to raise the reader’s curiosity. This leads to Eco’s theoretical work on popular fiction, visible in essays such as APOCALITTICI E INTEGRATI and IL SUPERUOMO DI MASSA. If, in Eco’s interpretation, the aim of popular fiction is to create a myth, such is likewise the purpose of history in BAUDOLINO, as it would seem to be proved by Otto when he encourages the protagonist to pursue Prester John’s kingdom. The Prester is a Nestorian Christian priest-king descended from the Magi who allegedly offers to help the Church and Jerusalem in their fight against Islam [7]. Otto is a firm believer in the Prester, and he teaches BAUDOLINO that it is not important that all events told are true but only that historians or authors believe they are. To testify falsely something which is believed true is a virtuous act because it compensates for a lack of proof of something that certainly exists (BD, p. 61). What is really important is that in the narrative “tout se tient” in a vortex of differing interpretations (BD, 146). Despite BAUDOLINO ’s wordy heroism, his journey to Prester John’s kingdom cannot be entirely dangerous: he can either find it or make it up as long as the political needs of Friedrich the Great are satisfied.

Thus BAUDOLINO’s invention is compatible with Lombard’s change of historical facts. Both characters consolidate the authority the leader of an internally fragmented community - O’Neill in MAKING HISTORY and Friedrich Redbeard in BAUDOLINO. The latter, however, is almost a grotesque version of the former. While Lombard modifies those aspects of the truth which put O’Neill in a bad light while remaining faithful to the broader context, BAUDOLINO makes up a fantastic story full of monsters and fantastic creatures which cannot possibly be taken for real. Whereas seriousness and drama characterize MAKING HISTORY, BAUDOLINO belongs in the light and mocking atmosphere of parody.

A reason for comedy can be found in Eco’s distrust towards the myth-making characters of popular fiction. In his study on Superman, Eco points out that the readers of this comic belong to a levelled down society characterized by psychological frustrations and inferiority complexes. In this society, man is a number belonging to an organization which decides for him. Superman, a hero coming from outer space, can do almost anything by using his powers. At the same time, through the character’s double personality as earthling Clark Kent, the reader identifies with him. In brief, Eco concludes, any ordinary American man can secretly dream to revenge years of mediocrity by turning one day into a superman [8]. But precisely because that is only a dream, the myth of Superman serves the purpose of maintaining the majority of Americans within the walls of their mediocrity. In addition, Eco points out how Superman’s civil consciousness is split from his political consciousness. By using his powers, Superman could exercise put an end to famine in the world, create wealth for the poor, or free the Chinese from Mao’s dictatorship. Instead, he spends immeasurable energies to organize charity events in his small community. He travels galaxies but does not explore the Earth or even the United States. Despite occasional battles against extraterrestrial evil, Supermam’s fight is against local crime (Eco, 1964, pp. 256-60).

In IL SUPERUOMO DI MASSA Eco argues that popular literature is “socialdemocratico-paternalista”. While the popular novel denounces the contradictions of society, it offers consolation. It is a “macchina gratificatoria” whose purpose is both to please and keep at bay the reader [9]. In Eco’s view, the popular novel offers temporary satisfaction to the oppressed in order to reinstate the rules which it defies. Balzac’s Vautrin, Dumas’ Montecristo and Sue’s Rodolphe are all supermen acting in defense of the poor but their actions are in reality reformist rather than revolutionary. Eco argues against these “supermen of the masses” because they decide by themselves what is good for the humble individual and act on his behalf without consulting him. Those who are fascinated by such myths live in a dream and ask the popular novel to console them with fantasies of justice in order to forget that in reality they are deprived of it (Eco, 1978, pp. 85-87).

To conclude, this paper has attempted to show how both Friel and Eco see in their literary works the opportunity for suggesting changes in society. However, the methods they suggest to change society differ. Friel adopts seriousness of tone in order to plunge into the depths of societal emotions and human complexities. Conversely, it is with humour and irony that Eco demystifies those beliefs which impede progress in Italy. Whereas Friel sees the need for creating a myth in order to unite his nation, Eco suggests laughing at the myth which suggests that the North of Italy should be independent from the South.