Midi Z, THE ROAD TO MANDALAY 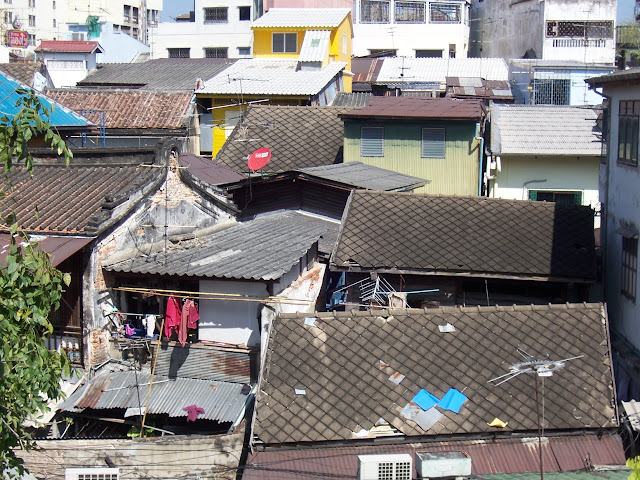 Young Burmese Lianqing migrates to Thailand from the town of Lashio in the Shan State without proper papers, smuggled in by illegal mediators to whom she pays a sum of money. One of the passengers of the combo car that drives them to Bangkok is Guo, a young man who takes to her at first sight.

The two gradually start a relationship. Guo works in a factory away from the cities in a place where documents are not requested and the police does not seem to interfere. Lianqing does a number of jobs but she eventually has to quit, due to lack of a work permit.

Guo finds her a job in the factory. His plan is to save as much as possible, go back to Myanmar, marry Lianqing and open a shop. She has a different plan, she wishes to live in the city and eventually, in order to pay corruption money for a regular residence permit, she works as a prostitute.

In the shocking ending scene, Guo kills Lianqing and then commits suicide.

From a social angle, there are of course several themes which can be related to the Burmese and Thai situations as well as to world migration. The illegal networks, the corruption of the police, the difficulty to have a regular life in the host countries are all topics which have sadly become common in the last few years.

Interestingly, Midi Z shows the plight of migrants without overtones of didactic conceit and arrogance, but rather through the eye of the camera levelled to the subjective experience of each character, so what they do, how they react, and what they think comes out as natural instead of being presented as the over imposed ideology of the director.

The result is a timely combination of document and story in which images play the dominant role and words are spared.

The love story takes place with much restraint in an introverted psychological atmosphere. Even Lianqing’s decision to change her life, and Guo’s anger, are represented mostly through images. Guo overworks at the furnace of the factory, almost a kind of hell. Lianqing’s prostitution experience is rendered via allegory by showing an iguana on the bed that slowly climbs her dressed up body.

In an interview, the director reveals that his film is based partly on the experience of migrants he knows (and he is himself a migrant to Taiwan where he eventually acquired citizenship), and partly on a true fact which took place in 1992 when a migrant, after going back to Myanmar, killed his girlfriend who wanted to return to Thailand against his will. The committed explanation Midi Z gives for the ending of the film is based on his observation of behaviour. In his view, it is common in Asia that a girl makes compromise to reality as Lianqing and some of her friends do in the film. The director also observes that tragedy comes from the different views of the two characters, and from the wrong idea that women are considered men’s possession.

The film is visually rewarding for its scenes of nature and some details of the processing of raw materials in the factory. Wu attaches depth to her character, and Ko acts energetically yet in non-narcissistic manner.

A good film, I think.

PS. Why is this film called The Road to Mandalay? How does this title relate to Tod Browning’s 1926 silent film, to Kipling’s poem Mandalay, and to Oley Speaks’ song “On the Road to Mandalay” - three texts which have rather different connotations from Midi Z’s?