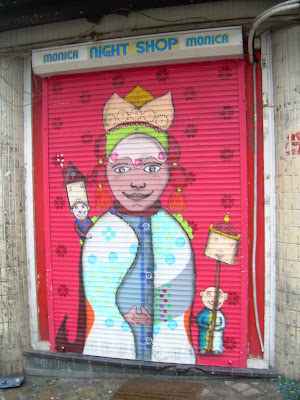 [A modern Muse of a placid, colourful variety (From the walls of Brussels, 2010). Foto di Marzia Poerio]

BE YOUR OWN MUSE

Bettina saw herself as Mignon, not the Countess, in Mozart’s MARRIAGE OF FIGARO. She had a light soprano voice and boyish ways. The pert little swagger had the world dancing around her. ‘She didn’t learn that from the Ursuline nuns’, her Italian father said. He had made his way in Prussia by sketching society women and marring a von La Roche. Bettina consolidated the family’s position by wooing and winning Achim von Arnim, a prince famed for his romantic poems. Her prince didn’t quite carry her away on a white horse. Though she gave him a healthy child every year for seven years, her ‘teasing presence’ affected his poetry adversely, and they lived in separate castles. This arrangement suited them both. Bettina served as the absent lady to his troubadour self, and she established herself as the life and soul of the literary salons of Berlin.

Bettina was nobody’s muse. Claims have been made that she inspired Goethe and Beethoven. It was the other way round. She fell in love with them. But her coups de foudre were so many and public that no one waited for the thunder. Even Beethoven smiled, and Goethe forgot himself sufficiently to tell his wife (a mistake). She was her own muse, amusing herself and others with her grand passions, and pseudonymous dedication to the practice and appreciation of all the seven arts.

It wasn’t a question of talent but of demi-urge. Everything she touched went into a spin and she whipped up the top till it whistled. She sang, composed songs, painted, illustrated books, and wrote letters. What remains of her work is a reputation second to none in Germany for doing everything and leaving almost nothing. We know her sophisticated folksongs made Clara Schumann jealous, and then generous, conceding ‘Beans Beor’ (her penname) was ‘the best woman composer of her time’.

Bettina wouldn’t have cared. She was more interested in other artists and musicians, and, when her poet prince died in her mid-forties from a heart attack, in how things should be in the world. Anyone who tried to get Beethoven and Goethe together with Count Puckler-Mushau, landscape gardener, to create an open-air spectacle of Germanic genius was an optimist. Unsuccess didn’t deter her. She learned that egos ruled the world, put it around that the wandering Count had became a patron of ice-cream, and wrote pamphlets as a social reformer (‘in a small way’). Her latter-day writings on the poor and sick were backed by practical philanthropy. She carried coins in her socks.

Bettina was better blessed than Clara with her children. Both had seven of them. Hers were the original ‘damn clever bunch’. They had a finger in every creative pie. Each represented an art. None surpassed her reputation for being famous without any obvious reason save her goodly self. She lived long and well, and is not forgotten. A second-class stamp in Germany bears her image.

THE POET EARTHS HIS MUSE

Is the title of Lou Salomé’s book on Rilke YOU ALONE ARE REAL to Me quoting him? Or is she saying it directly from her heart? It is not clear. Either way the sentiment is worthy of a fortune cookie. The poet and his muse deserved better.

According to Lou Salomé, Rilke said to her, ‘You are my reason for carrying on’. She found it depressing. Not just the responsibility. The remark contained a subliminal statement of despair, and who wants to have to pick up the pieces.
Her pleas that he see Freud fell on deaf ears.

Even though Lou Salomé moved on from platonic lovers like Nietzsche, Tolstoy and Ibsen to younger poets, they remained friends. Rilke’s last letter (to Superveille, the French Uruguyan surrealist) concludes:

that poor broken vase
whose shards remember
they once were clay.’

I wonder if Lou Salomé was called Hilda Bellamy would all those great men have paid her any attention?