Andy Paice, DOES SPIRITUALITY HAVE ANY RELEVANCE FOR WESTERN INTELLECTUAL CULTURE? LOOKING FOR ANSWERS IN THE BUDDHIST TRADITION [PART 2] 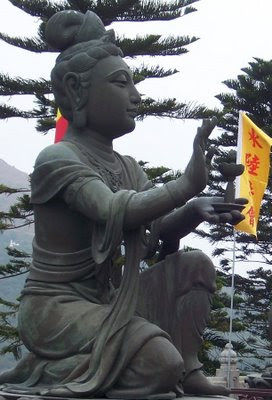 
The Madhyamaka position goes even further to say that a “no-self” cannot be found either. That indeed the true nature of phenomena is unqualifiable, beyond any conceptual labelling whatsoever.

This position should not be misconstrued as a nihilistic point of view which states that nothing exists. Ultimately it points to the fact that phenomena lack any kind of inherent reality, yet relatively things do exist as labels imputed on to conglomerates.

For example, “I” do exist, but the solid, permanent, inherently existing kind of “I” that mind habitually takes to be real can be conclusively found to be nothing other than a delusion. So the way in which “I” truly exist is simply as a label, a thought which is imputed onto the collection of the body and mind.


The above is an example of a meditation on the inner phenomenon of the “I”. Yet all outer phenomenon can be subjected to the same kind of analysis. Thus following the same logic
the self, sentient beings, the world, the universe are nothing more than thoughts, lacking any concrete or inherent reality.

This brings us to an awareness that all inner and outer phenomena are of one and the same nature of selflessness or emptiness. Since everything is of this nature there are no real boundaries separating anything. Despite all manifold things appearing in their diversity their true nature is found to be this same unqualifiable reality. To understand this is to understand the unity of all things, what the Buddha described as the “seamless garment” of all phenomena.

Through analysis one can come to an intellectual appreciation of this so called empty nature of reality. However as we saw earlier the very point of the Buddhist teachings is to lead one to an actual experience and realisation of this nature. Since all phenomena can be found to lack an inherent self the same can be said for our very being. This means our very being has no boundaries. Ultimately there is no separation between ourselves and others, the planet and the entire cosmos. This is the reality of non-duality. Siddhartha, the Prince, sitting under the Pippala tree was said to have achieved a complete liberation from all kinds of delusion concerning the truth of reality and through realising this non-duality was named the Buddha, the awakened one.

However we are habitually caught in a mode of perception that apprehends only the superficial and partial side of this unity. Due to the natural fact of living in the world we are obliged to make distinctions and to divide reality into fragmented concepts of this and that, self and others, mine and not mine. However by not letting go of these boundaries and distinctions and being instinctively caught in the belief that they are real the end result is that of suffering. By misapprehending the world we misapprehend ourselves which is the primal cause of every kind of pain.

Therefore by following an intellectual process of reasoning it is possible to reach a profound understanding which is in the order of spiritual truth. Rigorous intellectual examination and spiritual or religious experiences need not be mutually exclusive territories.

By understanding this approach it becomes possible to appreciate a core reality at the source of every religious tradition, yet which belongs to none of them. Although this would certainly not be the orthodox view from within the majority of religions, it is possible to surmise that all of them have sprung from individuals experiencing this unity consciousness. One can speculate that pathways, to bring followers to similar levels of awareness were systematised according to the varying mentalities, traditions and times. Whether or not the religions then developed as their founders would have liked is altogether a different question.

If we are to look at the Christian injunction of “Love thy neighbour as one would love thyself” from the point of view of a non-dual appreciation of reality, then one’s neighbour actually is oneself. This understanding of religion as a vehicle of divinity which is not separate from oneself radically changes the reading of what various sages, masters or prophets were perhaps trying to say. What appeared to be moralistic ‘commandments’ now reveal themselves to be guidelines of how to relate with one’s greater self (or indeed non-self in the Buddhist tradition) which transcends the boundaries of the individual self.

“Just as hands and other limbs
Are thought of as the members of a body,
Can we likewise not consider others
As the limbs and members of a living whole?

Just as in connection with this form devoid of self,
My sense of ‘I’ arose through strong habituation,
Why should not the thought of ‘I,’
Through habit, not arise related to another?”

Buddhist doctrine exhorts compassion for all forms of sentient life, but again this is not merely a proscription to become a do-gooder. Indeed psychologists and neuroscientists have attested to the fact that cultivating compassionate states of mind have a positive effect on our own psycho-physical well being. Furthermore the teachings conform to a logic that compassion is a natural response for a mind that clearly sees no separation between self and others. Thus others suffering becomes ones own suffering, which in turn prompts action for the welfare of others.

The practice of a spiritual path based upon a meditative technique also simply ‘brings the mind back home.’ In today’s world of increasing stress and anxiety a simple meditation practice which centres the mind can be of enormous benefit to one's all round health. One does not even have to rely on any particular belief system in order to reap benefit from meditation.

So does Spirituality hold any use or relevance for Western Intellectuals? From the Buddhist point of view the answer would be a resounding yes. Indeed, universally, going through life unaware of a greater dimension to one's own being is tantamount to being cut off from a greater part of oneself. From this perspective intellectual inquiry alone can never fully satiate the deepest yearning of one's being, namely to know one's own greater nature. Conversely there is also an argument that spirituality and intellectual endeavour need to work together. Spiritual practice may heal the wounds of consciousness yet human society will always have a need for cognitive growth and evolution. Reuniting the the hitherto divorced fields of Spirituality and Intellectualism in the West could be a cause for a blossoming of potentials that would bring forth a Renaissance in all kinds of fields of human endeavour.

The aforementioned description of selflessness and the non-dual view of reality, which gives rise to compassion for others and provides a remedy to suffering, is the quintessential core and raison d'être of Buddhist practice. Yet of course, along with all religions, Buddhism does contain certain aspects which may be considered spurious to any serious intellectual examination. A fundamental Buddhist notion is Karma, the law of cause and effect which states that our present experience in life is the ripening result of past actions. Although this resembles laws of causality in Physics, it is something which is evidently very difficult to verify. Buddhism also sets forth the existence of reincarnation - that we continue to turn in cyclic existence until we realise the fundamental nature of enlightenment, and it also describes various realms which one can be born into as a result of various actions. So can such ‘beliefs’ be adopted by modern critical thinkers?

The question is a complex one, which today in the advent of an emerging ‘Western Buddhism’ finds varying responses. This confrontation of traditional Buddhist teachings with the cultural heritage of the West is still in its infancy, yet is already producing new presentations of the doctrine. Buddhism arose in the cultural context of pre-modern Asia and now that it is establishing itself in the West there are unavoidable tensions arising due to the contact of two different world views. Yet the Buddhist tradition has always adapted and evolved according to the mindsets and customs of each country that it finds itself. The European Buddhist Union’s recent exchange on “The Features of an Emerging European Buddhism” bears witness to this:

“In the process of assimilating the dharma (Buddhist teachings) we are going to the essentials and are stripping spiritual practice of non-helpful beliefs. We want to follow a path of true liberation, and not of doctrines. It seems that the dharma coming to Europe from Asia enters into a marriage with our strong wish to become deeply free from narrow views and imprisoning habitus”.

Nevertheless, there is still widespread debate concerning what must be retained and what can be discarded whilst remaining true to the essence of the tradition. The English scholar Stephen Batchelor argues in his book “Buddhism Without Beliefs” that such notions as Karma and Rebirth are not fundamental to the goal of realising emptiness (as briefly outlined above.) Likewise the Tibetan teacher Dzongsar Jamyang Khyentse referring to the deeply ritualistic Himalayan Buddhist tradition states: “Theistic trappings such as incense, bells and multicoloured hats can attract people’s attention, but at the same time they can be obstacles. People end up thinking that is all there is to Buddhism and are diverted from its essente”. Therefore those who argue for a modern presentation of Buddhism say that the essential point is in discovering and progressively cultivating the wholesome experience of non-dual awareness. The fact that large numbers of educated, independent-minded Europeans and Americans are finding use and benefit in the teaching points to the fact that many are indeed acquiring at least a taste of this spiritual dimension. This does suggest its relevance in the modern world.

We have looked into the Buddhist tradition as an example of a tradition that has a possibility of bringing benefit to Western Intellectual Culture. Yet what of other Spiritual traditions? As has been suggested here, humanity has an inherent spiritual dimension that can be accessed, even by means of the intellect. Therefore if this dimension can be recognised, such as through a meditative technique, this opens the possibility of returning to the hitherto discarded religious traditions to explore truths they may contain. This particular field of inquiry is exemplified in the work of the contemporary American philosopher Ken Wilber. In his most recent publication he posits a way forward for the reconciliation of the sciences and humanities with Spirituality- fields which have been distinctly divorced since the Western Enlightenment. He argues that Postmodernity has effectively won the battle in refuting metaphysical presentations of reality but that the religious traditions do contain the ability to introduce individuals to the undiscovered spiritual dimension of their being. He reasons they can and do function in this respect even if their metaphysical descriptions are discarded.

Spiritual experience is something that is problematic when one tries to convey it through the media of words. However I have attempted to put forward through looking at the example of Buddhism, the fact that Religion and Spirituality do not have to be rejected in their entirety by Western Intellectuals. In spite of the scorn received by Spirituality in serious academic circles, it still represents an important area of truth that must not be dismissed outright. Serious research by intellectuals into the Spiritual traditions, not simply as objects of knowledge but as vehicles of inner truth, has the potential of being mutually beneficial for both Western culture and Spirituality. If humankind is to move beyond the individualistic and personal gratification that is destroying our global community perhaps the time is right for a marriage of sense and spirit.