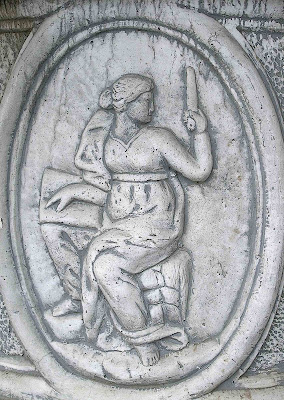 [Book and the mirror (From the walls of Imperia). Foto di Marzia Poerio]


The professional ethic in employing muses for literary purposes is avoidance of intimacy. As observed by Dante Alighieri with Beatrice (Bice Portinari), and Henri Beyle (Stendhal) with Metilde. In Dante’s case it was virtuous, in Henri’s willful. Metilde wouldn’t have minded a fling (he made her laugh), but he was too busy writing a book, DE L’AMOUR (1822), about her resistance to his pleadings, while enjoying the mature charms of Madame Pasta, an opera singer who, when she sang IL CIMENTO to a full house at La Scala, made him think she was publicly celebrating ‘the cementation’ and not ‘the ordeal’ of love, for his Italian was as unreliable as my French. Dante’s poetical pursuit of Beatrice outlived Bice Portinari by thirty years.

Dante first sees Beatrice when she is eight and he is nine. A little girl dressed in soft crimson and a girdle that Giotto used to grace the waist of his Ognissanti Madonna. He goes out of his way to see her in the street, accompanied by maidservants. Each time she passes by, he says a prayer. This is how he started writing poetry. Then one afternoon he encounters her dressed in white and chaperoned by two grand ladies. His ange du passé is a slender young woman. She turns around and greets him with a smile that fills him with such joy he has to go home and tear up all his stupid poems. That night he dreams of a little girl in crimson with a Giotto girdle blossoming into a bride-to-be, Simone Bardi’s, and weeps until his are red. Next day he starts on his life’s work, to compose poetry as never had been offered to any woman before.

LA VITA NUOVA explains what Dante had to do. Find a new language and a state of mind untrammeled by mundane distractions, so a heaven could be created around his love. Only once did they met eye to eye. Though there were little hands flutters when her husband, Simone Bardi, flaunted her to his old school mate. Six years LA VITA NUOVA began to take shape. Signora Bardi died in childbirth and became Beatrice, the Blessed Virgin of his PARADISE.

The story of a muse is a myth drawn together from fragments of archeology. In the case of Stendhal’s Metilde the pots and pans are historically documented, as Henri Beyle kept notes, with diagrams. Metilde Viscontini Dembowski died four years after he published DE L’AMOUR, and he inscribed the date on the flyleaf of one of the many unsold copies, ‘1 May 1825, the death of the writer’ (in English). He contradicted himself in his notebook. ‘I spent most of my life trying to make peace with people. Now I rest in peace with myself… Her death marks the death of my illusions… I think I have found a found a subject that I am equal to.’ Metilde had been the muse perched on his shoulder as he wrote DE L’AMOUR.

Passion had made him tongue-tied in her presence. This obliged him to make a French fool of himself. He become ‘a man of wit’, which was not difficult for him. Drops of blood forming on the blade of the guillotine inspired him to remark, ‘I don’t know how many days afterwards I couldn’t eat meat’, and an army officer ‘decorated at Waterloo retired to become a roué and had so many women that he had become sincere on the subject’.

Henri amused Metilde, and kept his higher feelings for DE L’AMOUR. When she died at thirty five she haunted his profane comedies. LE ROUGE ET LE NOIR and LA CHARTREUSE DE PARME needed a worldly-wise woman in his ear as a ready reference. Not being pure at heart was Stendhal’s genius: his acceptance that knowledge and ignorance are the two sides of the same coin. He continued to amuse his âmes sensibles (the happy few) with his autofictions, the MEMOIRS OF AN EGOTIST. And MY LIFE AS HENRY BRULARD.

I wonder, though, what Metilde thought of DE L’AMOUR? I’m sure someone smuggled it into the prison her house became when she was arrested by the Austrians for being an Italian nationalist. ‘What a lucky escape’, I think. She would not have any time for his sublimations. But Henri had the good taste not to play with the analogy between the May Day death of his revolutionary love, and the ‘death of his illusions’. He had outgrown the muse of DE L’AMOUR, but not Metilde, whom he could not honestly include in his list of thirteen women ‘that I loved, more or less’ (MY LIFE AS HENRY BRULARD). Though he did.

Henri took things more personally as he got older. Whenever he heard the bell of the church in Grenoble, where as a boy he saw his mother’s dead body, he clenched himself in the grip of ‘a dull, dry, emotionless sorrow that is neighbour to anger’. He never lost faith in the republican ideals of his youth (and grandfather), anymore than his love of music and Shakespeare. ‘Napoleon as was (before he crowned himself Emperor) and Cimarosa, Mozart and Shakespeare. These are the names I want on my gravestone, a marble slab in the shape of a playing-card.’ This epitaph is on the flyleaf of my copy of the MEMOIRS OF AN EGOTIST.

Beatrice and Metilde smile on their Dante and Stendhal ‘from the balconies of the heavens’ in the DIVINE COMEDY and DE L’AMOUR, but receive in return ‘the smirking regret’ of posterity (Baudelaire). It is not beyond imagination that it might have been otherwise. If Stendhal had less wit and more sense, and Dante was not bent on transforming prayer into poetry, they might have married their muses. How many children had Beatrice and Dante or Henri and Metilde? Beatrice died at the peak of her fertility, carrying the child of Simone Bardi, who bullied little Dante in school. Would she have survived if it had been a little Dante? Metilde, not in her first flush, would certainly have tried for a son to fight for the Carbonari. As it is, we have to content ourselves with the poetry and two great novels. Dead muses have a purpose in life.