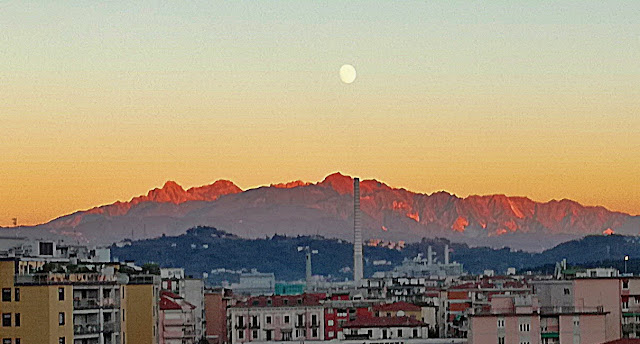 In the first period, in the 1940s and early 1950s, the basic aspects of his subject matter and style were formed. They include a world of manual workers and middle class characters; an existential view on life; and bareness of words. Some of the works in this decade were La visita (1942), Rosa Gagliardi (1946), Il taglio del bosco (1950) and Il soldato (1957). Il taglio del bosco tells the story of Guglielmo who, after recruiting a team of woodcutters, leads them to the forest where they work for a while. The techniques they use, a description of nature and personal preoccupations characterize this novella. Guglielmo is coming to terms with grief for the death of his wife. The story ends with him in front of the graveyard, his pain still unresolved. Rather than telling a series of eventful adventures, Cassola focuses on thoughts and emotions, or what he called “a poetics of subliminal life”.[1] Time “flows always the same and in tranquillity”.[2] Though a believer, Guglielmo’s recollections of his wife are based on her concrete life rather than on spirituality. Attention to the activities of the working class is revealed by the specific words used to describe the cutting. Historical events are mentioned, especially war, recession, and emigration, but the story remains indeterminate rather than based on the zeitgeist. On an intertextual level, in this as in other texts, to remain just with two authors in the English language who were particularly important for Cassola, one could mention the universe of local roots and sentimental involvement of Thomas Hardy, and the symbolic realism of Joyce’s Dubliners. Among contemporary Italians, Cancogni (1916-2015) and Bassani (1916-2000) were perhaps the most compatible of his peers.

In 1949, Cassola went through what he called himself a “crisis” which prompted “rejection of the previous project of existential narrative”.[3] Even though the rejection was not full, he did write stories based on the Resistance movement and antifascism in general, most famously: Fausto e Anna (1952), I vecchi compagni (1953), Baba (1959), La ragazza di Bube (1959-’60), La casa di via Valadier (1960). Perhaps the most interesting, and partly contentious, of these novels is La ragazza di Bube which tells the story of a Communist partisan, Bube, who, in 1945, about a month after liberation, with another Communist, kills a police sergeant and his son in a confused situation in which the sergeant opens fire first but also on the ground that they are fascist. Initially protected by radicals within the Italian Communist Party, he hides in Jugoslavia and France, but is eventually extradited and arrested. The trial is prolonged until 1948, a year of elections in which the leadership of the Communist party, in order to appease the middle class, and also due to losing the election, prefers to have Bube imprisoned rather than defended in the light of the heated atmosphere of the time when the crime took place. This political story interacts with Bube’s private love story with Mara, who is sixteen at the beginning of the novel and goes through a process of growth into adulthood by proximity with these tragic events. In this respect, La ragazza di Bube is a bildungsroman. On the level of moral values, while being independent and proud, Mara, despite the courtship of another young man, Stefano, when Bube hid in France, is also traditionally loyal to her boyfriend and her father’s Marxist ideals while opposite to violence and favourable to humane considerations in life as well as in political matters. According to Italo Calvino, she is one of the best characters in post-war Italian literature (“Mara, forse la prima apparizione umana positiva di grande statura della nuova letteratura italiana”). The novel is emotional and it was a bestseller, yet, despite its clear condemnation of Fascism, it was criticized by some on the left because it presented the left-wing movement in a non-heroic, though tragic, light, but perhaps this is precisely its merit.

The third phase of Cassola’s career, in the 1960s and early 1970s, was seen by the author as “a partial return to the poetics of my youth”,[4] with stories such as Un cuore arido (1961), Ferrovia locale (1968), Una relazione (1969), Paura e tristezza (1970). Un cuore arido tells the story of dressmaker Anna and her sister Bice. Enrico, in love with Anna, after being rejected by her, eventually marries Bice. Bice’s previous boy-friend, Mario, also falls in love with Anna and finally emigrates to the US. Anna has an affair with a rich man, Marcello, who does not really care about her and marries a girl of his milieu. Mario calls Anna to America, but she refuses to go, and decides instead to live on her own quenching passion and having a quiet life. The concept of aridity is the most relevant here, rescued towards a positive meaning of withdrawl from error, excess and insincere sentimentality, and a move towards dignity and loyalty to oneself.

The last phase of Cassola’s career saw three main directions. Some novels continued motives previously confronted which had granted Cassola success. But at the same time, strangely perhaps, he was intent, as he states, to “destroy the myths that had guided me, especially two of these: the myth of the pure, simple girl, and the myth of the antagonist”.[5] An example of this is Gli anni passano (1982), a sequel to La ragazza di Bube. In Gli anni passano, when Bube gets out of prison he isn’t any longer the assertive antifascist of his youth. He has become an “opportunist” who,[6] in line with the official policies of the Italian Communist Party, even defends Togliatti whose directives in the 1940s had contributed to his arrest in the first novel. In Gli anni passano, Bube is disappointed by Mara who therefore appears to have waited for him in vain all those years. The novel informs us that Bube still “seemed a young man”,[7] whereas Mara, who has a traditional role of wife and mother in this text, is described as a middle-aged person who “had put on weight and had withered”.[8] Bube and Mara divorce, and he starts a relationship with a woman the age of his daughter. Cassola’s 1960 ideals of conjugal fidelity, loyalty to principles and idealism were indeed torn apart in 1982.

Other directions in the last phase of Cassola’s work are historical novels such as Il ribelle (1980), set in Roman antiquity, and characterized by a positive evaluation of the original message of Christianity which the pagan protagonist, Severiano, comes to see as a revolutionary ideology; and some science fiction novels in which Cassola voiced his concerns about the environment and the possible end of human life due to war, ecological irresponsibility and catastrophe. In this narrative cycle, we find L’uomo e il cane (1977), Il superstite (1978), Il Paradiso degli animali (1979), Ferragosto di morte (1980) e Il mondo senza nessuno (1982).

Cassola wrote with honesty, in a concise and non-rhetorical mode, about a defined geographical area, which is occasionally Rome, but mostly a section of Tuscany between Grosseto, Livorno, Volterra and Cecina. He portrays life through details reduced to the essential. His characters’ problems and choices, while understandable within the historical events that they witness, are at the same time meaningful to all readers for their universal nature.