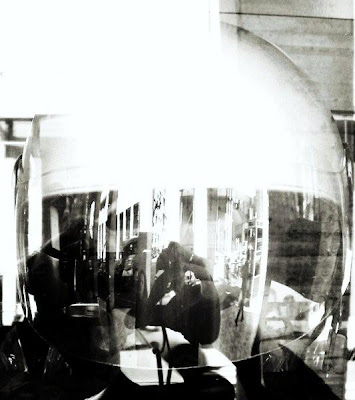 [A flimsy reality as reflected in a helmet. Foto di Marzia Poerio]


ASTRAL BODIES is Jay Merill’s debut collection of short stories. The title of the collection already hints at the nature of the characters we will find within the pages: disconnected bodies struggling with loneliness, isolation and overwhelming banality, people who have lost their home and all meaningful human contact, whose sense of self is nebulous, whose lives seem unreal, as if they are strangers to themselves. Merill offers glimpses of these lives, made tantalising by the brevity of the stories, some of which are only two pages long. It is here that her skill as a writer is most apparent. By exploiting particular techniques and structuring her stories very carefully, she manages to perform a synaesthetic trick, transforming a tiny fragment of life into the whole, so that we have the impression that we know these characters completely. We know where they’ve come from, how they’ve ended up in the rut they find themselves in and, with very few exceptions, why they are doomed to stay there.

The exceptions, however, are notable not only for the torque and tension of Merill’s language which creates a sense of impending disaster only to release the characters at the last moment with an almost imperceptible shift in tone, but for the role the more positive stories play in the overall structure of the collection. It seems that the collection is built around them so as to end on a note of hope.

Within this structure, even when the outcome is a happy one, uncertainty permeates the stories and is one of the themes that contributes to the disturbing sense of doom that runs throughout the collection. Nothing can be taken at face value. The idea of the truth being completely mercurial is probed in several of the stories where the characters seem, even to themselves, to be actors playing out the drama of their life, as if it isn’t their life at all. In “The Girl Can’t Help It”, “there are so many mixed messages, so much of one kind of thing which could be the very opposite of what you think it is.” The only way the girls have of coping with the inability to distinguish what is real from what isn’t, is to circumvent reality completely by inventing a fictitious world. The irony is that they do this deliberately, making direct comparisons with the theatre and the movies, conscious that they’re presenting a false façade to the world.

Clara in “Watchtower” is very aware that the men she has dated in the past “behaved as if they thought they were starring in a movie and she herself had almost begun seeing things that way as well”. The attraction of the alter ego and the exciting double life where it plays the leading role is strong. At the very least it offers some sense of control over one’s life. For some characters it is essential, given their crushing lack of confidence and their sense of impotence in the life they are living.

In the story from which the collection takes its title, Sharon’s solution is to invent many past lives which inform the present and give her a sense of importance as well as a sense of attachment to something, even if it is an imagined history, while her sister, Isabel, in an attempt to be different from Sharon, focuses on the future, feeling certain she can predict the outcome of the slot machines and the horses at the Amusements. For her, the thrill of the game makes up for the emptiness in life. But she seems unaware of the paradox she falls into. In order to escape her inability to communicate with her sister (“They lived in separate worlds”) she is attracted to a place where “No-one who comes here forms any kind of attachment in the world of the everyday…This is a special sealed-off place.” In this very private world of gambling to which she retreats unbeknownst to her family, she doesn’t have to face the stark reality of who she is, “her normal self in the drab winter coat”, a self she refuses to recognise and sees “like a stranger, as if that pale and angular woman there isn’t herself any more. Her real self is here in the horse. The lucky winner”. The allure of this escapism is so tempting, the characters so utterly defeated by life, that even though we know their pleasure can only be temporary, Merill has us hooked, rooting for their lucky number.

The uncertainty between reality and invention is perhaps at its strongest in “Salamander”, where Nerine’s very existence is in question. Even though she lives in the flat next to Don’s, “it was as if she didn’t really exist.” Nerine, acutely aware of the fact that she has been excluded from her own family and is disliked in her workplace, becomes paranoid about her own existence and her relationship with the neighbours. She imagines Don’s lover “wants to pretend I’m not here. She tries to unthink me.” If there was ever any possibility of establishing a friendship or even some sense of connection, however brief their neighbourly exchanges, it is made impossible by Nerine’s straddling of reality and paranoia so that the actual contact between her and Don’s lover is reduced in her mind to play-acting. “What I do, whenever I bump into her is to pretend I don’t really exist.” Merill manipulates the duplicity so successfully that the reader is also wrong-footed about what is real and what is not. In the crossover between reality and the imagination, the characters balance precariously on the fine line between sanity and insanity. But again, it is never clear who is on which side of the line. The reader is led along, equally confused, believing Nerine is mad one minute, sane the next. In this particular story, and similarly in “Chicken Eye”, the confusion, reinforced by obsessive behaviour and the many references to madness and the strangeness of a character, can give rise to some humour but, ultimately, the consequences are chilling.

Merill’s character descriptions seem effortless. In a few words she can impress a whole life upon the reader. From the opening lines of “The Outsider”, you can tell Josie’s amblings in the suburbs are leading her nowhere good. “Josie Colthanger is boozy, she’s bursting with sun-heat as she comes walking down the street – if you can call it walking…” In an expertly choreographed trajectory, her path will cross with dad’s, (“a slab of a man whose stripy suit jacket arms are a good two inches short of his wrists, they hang like awkward cardboard cut-outs attached to shoulders by drawing pins”) and with mum’s, (“a bulky monument…who sees herself as sweetly delicate in spite of the evidence)” with comical overtones of the Goldilocks story.

But sometimes, the name is enough to impart almost everything we need to know about the character. The name can objectify someone, as the nickname Salamander does to Nerine so that she seems to live up to the coldness and is seen as less than human, alien even. But Merill often uses names to comic effect. The child with “bad fish feelings” in the very moving story, “Billie-Ricky”, sees her cousin, Annette, who has “white pointy teeth” as a fish monster coming to get her, all “because of the net in Annette”. In Beacon, the self-absorbed aunt is Mrs. Oblivious while the boy from the protagonist’s school in the same story is Daniel, a seemingly unremarkable name until the letters are cleverly remixed so that “his name contained the letters of his perfidy”. Knowing that his name can be manipulated to something closer to the truth of who he is and what he has done gives his victim the only tiny sense of power she has over him.
Nicknames are exploited most to comic effect in “Blue Movie” where we meet the very endearing Puff and Squeak. As a duo they almost sound familiar, warm and comforting like Bubble and Squeak, with a Laurel and Hardy twist thrown in. They are a loveable pair. In contrast to most of the stories, the characters here work in tandem, helping each other out in their crazy schemes to escape their life and get rich quick. There is a genuine friendship between the girls even though Squeak is always two steps behind her asthmatic friend, a point which the author uses to comic advantage. When Puff has an asthmatic attack, Squeak comes to the rescue with her inhaler, “Puff on this, I squeak”. Every paragraph, bar one, begins with the word “Puff” and the names are repeated throughout, the girls only ever referring to each other by their nickname, so that the comic effect is cumulative.

Breathlessness is a strong feature of “Blue Movie”, but the breath and breathing in general also run as a leitmotif throughout the collection. Breathing is something that many characters are very aware of. Sometimes it is as if life is strangling them, as if “I’m this poor fish suffocating in a box, can’t breathe” (Billie-Ricky). In “The Girl Can’t Help It”, Beb uses her breathing to imitate “a cultured voice” which she aspires to, as if speaking differently, even though “it’s a strain and an effort being insouciant like this, being classy” will somehow take her away from her dull life and transform her into someone else who lives a far more interesting life. In “Tailback”, the sexual encounter between the characters, possibly the only instance in the collection of the participants enjoying the act, is marred shortly afterwards by the knowledge that a dog has been dying close by while the characters made love. The narrator can hardly breathe as she thinks of the dog. Whereas the sexual experience had been so delicious she had forgotten how to feel, she is now aching, coughing and spluttering, gasping for air. It takes the dying animal and the feeling of strangulation that ensues to bring this woman “to a wider awareness”.

Merill takes ordinary, often routine moments in the lives of her characters (combing the beach for “things” in “Yellow Plastic Shoe”, setting the breakfast table in “Tango”, sitting in a traffic jam in “Tailback”) and, even in the shortest stories, with her fast paced conversational style she transforms the moment, causes it to shift so that even though the characters never escape the drudgery of the initial situation, they get a glimpse of some new perspective. They’ve learnt something, managed to make some small connection even if it comes too late or, as happens in “Yellow Plastic Shoe”, even if the characters are unaware that any connection has been made, believing they are still poles apart.

These are memorable stories. They remind us that in many ways we are all astral bodies in search of identity, truth, love, meaning in quotidian acts and gestures. They remind us of the fragility of all of these things, how easily they can crumble and how difficult it can be to find them once they are lost. But above all, they point towards those moments of lucidity that appear like a light at the end of a tunnel. These are always there if we are brave enough to make small adjustments in thought or behaviour. As Merill says in “The Gold-Road”, a delicately constructed story where the protagonist unexpectedly finds connection in the symbolic steps she takes, “Sometimes, without warning, the world does change in this way.”