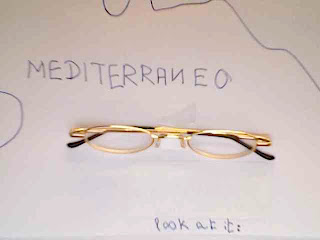 
This volume (University of Toronto Press, 2006) is comprised of texts by Vincenzo Consolo and is subdivided into four sections. Part 1, ODYSSEUS's JOURNEY: WAR AND EXILE, includes essays on the figure of Ulysses, the expiation myth for having built the Trojan horse, and the manifestation of its allegory in the wars and problems which still stir Mediterranean geopolitics today. Part 2 contains writings on SICILIAN TRAVELS: LAND, CITIES AND THE SEA. Part 3, MEDITERRANEAN CROSSROADS, includes texts once again on Sicily, but more in particular on the Arab presence there. In part 3, WRITING AS POETIC MEMORY, we find Consolo's statements on politics and culture, innovative literary expression, attention to history, nature, plurilingualism, and his questioning of the commercialization of literature.

Before this book was published, only Joseph Farrell's translation of IL SORRISO DELL'IGNOTO MARINAIO was available in English. Therefore READING AND WRITING THE MEDITERRANEAN is welcome not only because it constitutes a new thematic selection of Consolo's work agreed with the writer himself, but also because it is the first time that such a variety of works by this author becomes available in English through distinguished translations by Felice Italo Beneduce, Norma Bouchard, Mark Chu, Joseph Francese, Ben Lawton, Daragh O'Connell, Francesca Parmeggiani, Mark Pietralunga and John P. Welle.

In the editors' introduction (VINCENZO CONSOLO AND HIS MEDITERRANEAN PARADIGM, pp. 3-48), Consolo's biography is briefly illustrated, and a number of aspects of his poetics are clearly identified. The authors note that Consolo interweaves the "hystorical/rational" with the "myhtical/poetical", and this is the "basis for his identity as a writer situated at the confluence of expression and communication, myth and history, fantasy and reason" (p. 6). Commitment and literary experimentalism are emphasised equally and appropriately. Consolo's approach to the Mediterranean paradigm is identified as multifaceted. This paradigm is described with reference to theories such as Braudel's interpretation in terms of multilayered complexity, Cassano's focus on both sea and land, Hertzfeld's "rethinking of globalization from the perspective of regionalism" (p. 18), and Matvejevitc's outlook on the Mediterranean as a "dialectic of destruction and creation" (p. 16).

Consolo himself states: "I [...] feel the need of the memory of a Mediterranean culture, of a classical culture as the matrix of Western culture. Hence, my need to rediscover in these old and deep roots the meaning of our spirit before all of this is erased, before it all disappears".