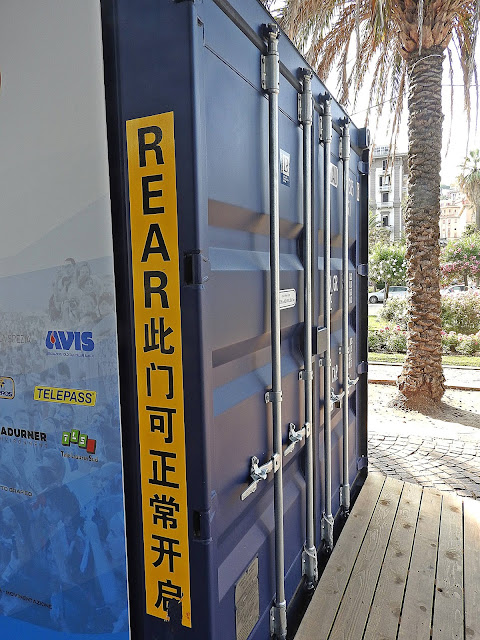 [A Chinese container on the peer of the Italian town of La Spezia (Foto Rb, 2018]

Following his 2015 Silk Roads (London, Bloomsbury), Peter Frankopan updates his look at world history from the east rather than the west to contemporaneity.

The fundamental point this book makes is that

“we are living in the Asian century. The shift of global GDP from the developed economies to those of the east has been breathtaking. […] The west is in danger of becoming less and less relevant. When the west does engage and play a role it is invariably to intervene or interfere in ways that create more problems than they solve - or to place obstacles and restrictions in place that limit the growth and prospects of others. The age of the west shaping the world in its image is long gone” (p. 250).

The main actor of eastern economies and societies is China with its Belt and Road Initiative which has the purpose to connect East Asia to central Asia, Europe and Africa through a network of projects financed by China itself via loans and financial aid to developing countries.

One would wonder whether this is a neo-colonial plan, an assumption denied by China, but a viable hypothesis in the view of the present writer, even though it is accompanied by a policy of support for weaker economies. These economies become indebted to their creditor, and if at times debts are either condoned or payments are delayed, links of a dependent nature are also created:

“The overburden of debts and the muscling-in to control ports like Hambantota in Sri Lanka have led to accusations that far from helping other countries to develop the Belt and Road is a programme that facilitates a form of colonialism that results in assets ending up in Chinese hands - in just the same way as the British had ended up in control of Hong Kong in the nineteenth century” (p. 113).

Vis-à-vis China’s initiatives, other powers are creating cooperative as well as alternative routes into the future. This is done mainly by India and Russia.

It is strange that Europe seems to waste its unity and cultural contributions while becoming prey of nationalism and populism, the latter being two joint problems which prevent the formation of an  authentic peaceful and tolerant as well a world-wide cooperative entity in a world where major powers and interconnected entities play and will increasingly play a major role.