Augustus Young, DANTE’S OTHER HALF 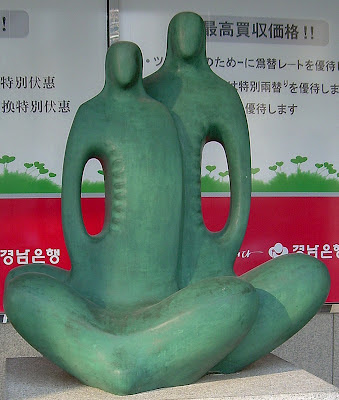 Dante Alighieri married Gemma, and fathered four children, including a daughter called Beatrice (after his first great love). He was rarely at home in Florence, an eternal student researching his Divine Comedy. Ubaldo of Gubbio, his drinking companion in Bologna, described him as ‘one who lived venerously in the arms of adulteresses’. Students in their cups brag.

Dante watched Giotto paint his ‘Last Supper’ in Padua. The experience taught him to think in circles and circles within circles. The resultant dizziness is reflected in the whirlpool of his master work. But he did not take Giotto seriously as a man. The painter’s flat face (‘as though perpetually pressed against a windowpane’) and fertility amused him. ‘Abrogio Bondone Giotto dabbed by day and begot by night - beautiful paintings, ugly children.’

Dante moved into the house of Malaspina in Lunigiana where the Count ‘tolerated him for his wit and humility’. Here he met the second great love of his life, Gentucca of Lucca. Every time she entered the room he heard a thunderclap. Gentucca, already spoken for, kept her distance. She never talked to him directly. The thunder was not followed by lightning.

Dante documented in Hell bad experiences he had in society. But he put Gentucca in Purgatory, a pleasant enough place. She inhabits an upper circle for shy souls who did not answer back. On passing he remarks to Virgil that Gentucca’s presence made Lunigiana seem ‘a kinder place’. He praises her for being ‘intelligent in love’. ‘Speak to me’, he says, a gentle joke. And passes on, unanswered as usual.

Ah! poor Dante made a poetic fetish of salutations and their silent responses. In Vita Nuova his first sonnet was exhultantly dedicated to a surprise little wave from Beatrice. Several of the other sonnets are songs of dejection at being cut dead. In a way, The Divine Comedy is one big hallo to a blond in a crimson and white dress who remains dumb. The last sonnet in Vita is an admission (confirmed in the prose commentary) that his silent ideal had been superseded in his earthly affections by a compassionate mourner at her wake.

Gemma is no mystery. She was the practical alternative to Beatrice, one of the belle menzogne, who is only really at home in a poem. Gemma was neither a fiction nor a beauty (Ubaldo in his gentlemanly way said as much). More the nurse mother, laying on the hands to smooth over the cracks. And she had no place in his poetry. But when sadness overcame him she was there to say, ‘There, there, Dante’. And made his bed and dinner.

Dante did not settle back home until he started on Purgatory. His interest in married women was now just poetical. Needless to say, wife Gemma isn’t mentioned in the The Divine Comedy. Beatrice, meanwhile, dominated Paradise. A muse is for eternity, a wife for life.

Kierkegaard on the way to town was passed by two oxen harnessed together, cantering along past him, the one jogging gaily, swinging his tail, the other with her head down putting in the hard work. Most happy marriages are like that, he thought.