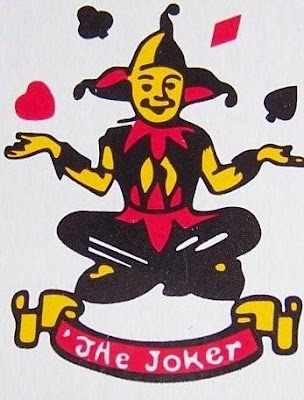 [One finds the joker, or jester, or buffoon, on cards but also in life. Two notable literary ones are in KING LEAR and in RIGOLETTO. Foto di Marzia Poerio]

My profession harks back to a very ancient tradition. I may of course be wrong in calling it a profession. It's really more of an identity. In fact one individual thought fit to dub me with the title. So I can only accept it as his own creation.

But then am I correct in calling it an identity rather than a profession? After all the question lies solely between me and my master.

At this point I suppose I should get down to brass tacks. I am a jester and a treasure hunter. A servant with two sets of duties. I spend most of my days thinking up thoughts to amuse my master, and I also procure rare objects for him.

My master, I fear, is very demanding. He wants me to amuse him, yes. He wants me to make him gasp in wonder, yes. The trouble is he isn't all that easy to amuse. He constantly, exclusively, surrounds himself with strange and beautiful objects. He is rich and handsome, but I detect an ever-present tremor of melancholy. The only thing that can give him any relief is for him to light on some illuminating intelligence in witty conversation; or else the sight of some elaborate and brilliant object. Of course I have to be very careful to keep my wit and my objects consistent! Otherwise he immediately flares up into indignant rage, drives me away, prevents me coming anywhere near him for the longest time.

Now not being with my master for days at a time is a painful experience. So I try to avoid it as much as possible.

In this relationship I describe you may easily imagine me seeking consolation for some cruel trick of nature which saddled me with a hideous hump swathed in motley.

Well, there you're wrong. I'm quite a good looking lad myself! And young. I have a family, a quiet pretty wife and a batch of twins. Only, living with them is so peaceful. What I'd call elementary. Whereas when it comes to indulging the tastes of my master, well now, that's absolutely enthralling.

All the time I spend away from him I'm presented with an enormous amount of material to choose from so I can get him to smile, and see his eyes flash with covetous greed. So having found him an object I polish it, find a setting for it, wrap it up nicely and leave it out ready for him. Then I wait for him to call me. This is exactly what I do with my jokes and fantasies when they come to mind.

I simply unwrap and remove them before his eyes, as though they are scarcely worthy of his attention. Then I slowly open my silk handkerchief, smiling modestly, and spread it on a low pouf. It would never do to look smug about it.

Finally, after a pause - nothing to do with hesitation - he steps a little closer to size up the object. Then he'll hold it up in his hands and look it over. There are of course times when he'll come out with a clipped No and dismiss the object with a contemptuous jerk of the head. But when he picks them up and holds them close to his face, moving his fingertips over the surface, he looks as though he wants them to speak to him. Finally he smells them !

His face lights up.

And that's all he ever says. Not another word. But you can hardly expect a gentleman like him to waste words. That's what a gentleman is. Take it or leave it.

Objects or ideas, no matter which, I am always prepared to set out on my quest. My master is never one to grant time off or holidays. But I'm bound to admit he consents to my long journeys by keeping silent about it. What he likes to feel is that I'm exposing my life, my personal safety, in my search for something to his taste; and risking arrest by hoodwinking customs officials and the police. In fact I do run infinite risks for the pleasure he'll get when I describe the hardships I've had to face for his amusement. For his pleasure my master insists I add nothing else. Be it clearly understood, all this is for his amusement. But after all that's where my own pleasure lies.