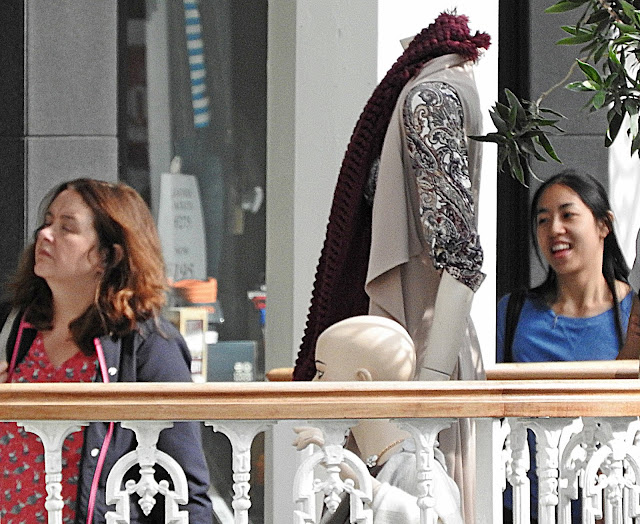 [The soul of the observing mannequin (Dublin 2015). Foto Rb]

Valerio Magrelli[1] is one of the poets who, in the 1980s, re-formulated the modern canon of Italian poetry after the experience of both Hermeticism and the Neo-Avant-garde. A number of paths were open for updating developments. A revival of Romantic sentimental poetry combined with echoes of early twentieth century Modernism was launched towards the end of the 1970s by poets such as Giuseppe Conte and Tommaso Kemeny. Some recovery of the Avant-garde was visible in the 1990s among the poets of the so-called “Gruppo 93”. A number of poets turned to subjectivity, both in the 1980s and 1990s. Magrelli followed his own direction. Since his first-published and pivotal collection, Ora serrata retinae, he created a poetry of meditation and objectivity which, while adopting a clear, understandable and resonant language, is at the same time philosophically reflective. As Italian critic Stefano Giovanardi puts it, one of the dominant features in Magrelli’s poetry is “confession and expression of oneself – but instead of aiming at sentiments, emotions and passions, the individual exclusively reveals his intellectual relationship with the world and himself (as well as, naturally, with his writing activity)”.[2] In this short introduction to Magrelli’s work, I will briefly go through some of his collections.

There are many elements that come together to compose the complex texture of words and concepts of Ora serrata retinae.

In Ora serrata retinae, Magrelli portrays reality as a network rather than as a linear dimension, and he renders it in a severe, measured and rhythmic language. There is a specular dialogue between the writer and his brain. The brain is defined as “the heart of image”.[3] In one of the poems in this collection, the writing individual is metaphorically compared to a landlord who lives in his brain in which he works to make it produce, but at the same time the brain lives inside the poet and appears to be the landlord himself.[4] In another poem, the eye that sees is also the inner eye of thought which fathoms water, a universal symbol for the unconscious and perhaps also, in this particular case, for the fluid nature of writing.[5]

What strikes most in this book is the interconnected action of the concepts of brain, eye and body in perceiving the world of things, situations and writing while the dimension of wake subsides a number of times into that of sleep.

To express this through one of the images used by Magrelli a few years later, we can turn to one of the poems in Nature e venature, the poet purports to be “a piece of fruit hanging / from the tree of sleep” and “lost inside the dough / of the night”.

Moving on to subsequent work, Nel condominio di carne (2003) is a book of rhythmic prose. Some prose in this kind of style had already been written in a number of pieces of Esercizi di tiptologia (published in 1992).[6] Prose returns in Geologia di un padre (2013), a series of memoirs of the author’s father after his death.[7]

The core subject matter of each of the short chapters of Nel condominio di carne is illness. We read stories of illnesses that affected the first-person narrator, yet each of these diseases functions as a starting point for poetic exploration along a number of pathways. These pathways include thoughtful reflections, memories from the past, and associations of various kinds leading both inwards to the deep psyche and outwards to the proximity of family and acquaintances and further off to society.

The author summarizes some of his intentions in the first line of the book: “My past is an illness contracted during childhood. Therefore I decided to understand how this happened. This medical report, then, intends to be not an anatomical theatre but rather a sequel of photograms, where what counts is the flux of images, the wriggling body which vibrates below me”.[8]

And when he describes a cyclorama in Atlanta, we might take his aversion to continuity as a metaphor for the fragmentary structural procedure which binds together a number of these individual texts: “For us, 20th-century creatures, the thread of a plot cannot remain intact; we wish for variations, seams, knots and patching. The uninterrupted band of Cyclorama is as remote to us as the ornamented spiral of Trajan’s column”.[9]

The mental content of memory deforms the events that took place at some point in the experience of real life. Such a warped dimension is allegorically represented by six vinyl records deformed by heat in the narrator’s childhood. And a visit Père-Lachaise cemetery in Paris spins a chain of associations that leads to what the author sees as a sentiment of death which succeeds to be revealing in a panoramic mental way despite its touristic purpose.[10]

We have indeed a modernist work that does not reject subjectivity, but it adapts feeling to thought, and obstinately pursues a non-commercial, zig-zagging variety of writing similar to early 20th-century prose.

I will move on briefly to Magrelli’s latest books of poetry.

In Disturbi del sistema binario (2006) we find three main aspects that define the presence in the world of contemporary human beings. The personal aspect is often indicated here by the family, and in particular a son and a daughter. The social aspect appears mainly in a section significantly called “Nella tribù”. And the divided, yet integrated, self, figures prominently in the section called “L’individuo anatra-lepre”.

The poems where the son and the daughter appear have moments of consolation, they express affection, and show some dreamy projection. A six year old girl is thought of as “a Laika orbiting around an uninhabited sky, / a satellite, yet a cub in the dark, the only celestial body / that throbs in a universe devastated by / sleep”.[11] In another poem she appears, even more clearly in terms of social significance, as “an antidote to evil”.[12] The son, despite building his adolescent personality by “proudly exhibiting violence”, is characterized by a “bewildered suit of armour made of feathers”.[13]

These children would seem to be emblems of softness and emotionality whereas the wider world is characterized by danger, precariousness and violence, by a situation of “guace”, or “guerra/pace”, a neologism translatable as “warce”, “war/peace”. One poem from the section “Within the tribe” is in fact about September 11;[14] another one is entitled “Watching the lines of refugees from home”;[15] tragedy alternates with irony on television programmes and technology described by an individual who claims to be “against evil”, “against nothingness” and a “hostage” of incompetent science.[16]

Magrelli’s interest in current affairs, and his conviction that the task of poetry is to “deal with what is near us”,[17] had already been expressed in a 1999 collection, Didascalie per la lettura di un giornale.[18] This is a book in which one of the concerns was the “zig-zagging line / of fracture / between technology and nature”;[19] and scepticism was expressed about the language used by newspapers, the position of readers as spectators of events, the abundance of violent crime, a world where “everything has due weight”.[20] Current affairs, perhaps in an even more disillusioned way, re-appear in a more recent collection, Il sangue amaro (2014).[21] Here the Christian turning the other cheek is reputed easier to say than to do since evil comes in between and makes this gesture difficult to perform; the subject is totally enslaved to the market; youth are jobless; and injustice pervades society.[22]

Against the background of such a social context, and as a metaphor for all of us, the inner psyche of the individual in Disturbi del sistema binario is divided into two parts, a “goose” and a “hare”, which take up a variety of connotations as the last section of this collection unfolds. The most emphatic of these connotations is perhaps the ambiguous ethical position vis-à-vis what happens around us, or, in the author’s own words, “This is the secret of the hare-goose: / how to be guilty / while remaining innocent”,[23] an updated version, one might say, of Eugenio Montale’s “no one is any longer un-guilty”.[24]

It is difficult for me to come to a definitive conclusion about Magrelli’s oeuvre. In his work, the analysis of the personal is a starting point for an examination of the collective; ideologies are set against unjust practices and received ideas; complexity wins over simplicity; a varied network of references to classics exists; and the risk of imprisonment in dogmatic truth is avoided. Structurally and philosophically, openness rather than closeness healthily seems to prevail.