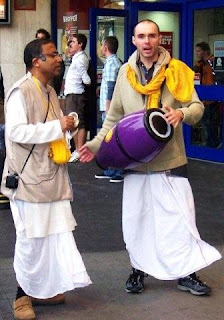 
The text of MAHABHARATA has been rewritten for this theatrical performance in a sequential, clear and pleasing way. The story flows smoothly and it is expressed through dance, songs and spoken dialogue. The Kathak traditional Indian style is but one of the various types of dance used, which include classical and rhythmic, choreographed in a suitably simple fashion based mainly on long lengths of fabrics of different colours stretched and folded at key moments, and on strategic positions of the actors on stage. The effect is to constantly capture the attention of the audience while conveying an impression of energetic action. The costumes and make-up used by Gary Pillai in the role of Krishna are also worthy of mention, with his blue body and face and the iconic garments. The music includes orchestral arrangements as well as a pronounced tabla base resulting in partly fragmented tunes which recall traditional Indian music while also innovating and including some Weber-like pieces. It all holds together very well. It is in fact a splendid performance, and I hope many of the readers will be able to enjoy it.

In the globalized world, myths still play a very important part, and like Western Greek plays, the MAHABHARATA, a founding epic and sacred text, is eternal and modern in its universal content. Draupadi falls in love with Arjuna, from the Pandava family, but she also has to marry his four brothers and she is shared among them to avoid conflict. She is lost during a game of dice to Duryodhana, the eldest of a related family, the Kauravas. Having lost reign, fortune and wife, the Pandavas are exiled for thirteen years. It is Draupadi who questions this total resignation to fate, and incites them to take revenge through war. During the crucial battle, Arjuna hesitates on whether to fight against his own relations. Krishna, in the BHAGHAVAD GITA section of the story, reveals simultaneously a non-violent philosophy, and the necessity of detachment based on sense of duty, which lead Arjuna to engage in war, win, avenge Draupadi and restore the order of the universe. Draupadi's sons are killed by the enemy out of revenge, and it is at this stage that she forgives, thus putting an end to the blood shedding.

This story clearly contains seminal and relevant human concerns and invites questions for contemporaneity on the senselessness of war, the role of destiny on a cosmic scale, and the meaning of individual and collective actions.